For the past 2 weeks, I have been making a fetish about waking up early so that I get more time to do everything I want to in my life! But, as some friends will smirk and roll their eyes and testify, I haven’t been very successful, but let’s say I have been a bit successful; please folks, have a heart, I have woken up early! Anyway, this post isn’t about my tryst with early mornings, but about today! Today, I didn’t wake up early! And why? Read on…

Delhi’s been burning, literally! People have been most inhospitable; I have been told not to come to their houses because either they are only half clad or because they themselves are dying to get out of their houses because the walls are hot and emanating hot sulphur! A lot of people have been caught sitting in the cars and running their engines so that they have AC! So much for climate change and the global warming lobby being active in Delhi! So, how has been my state: the less said the better!

In such a state, the heavens decided to open last night! In the evening, there was some breeze and some dark clouds. And, we Delhities are a loony lot and to acknowledge even this marginal change in weather, we decided to snack looking at the heavens. Perhaps, someone up there (my atheist friends, don’t take note!) decided to quench our throats and opened the flood gates. So, in the morning, I don’t even remember a moment before 8 O’ Clock! I woke up with a phone call from a friend suggesting a get together in the evening! All Delhities are loonies, I tell you and all it takes is just a change in the weather, and bingo!

Even then, I wasn’t sure what the outside will look like, and I gingerly made my way to the balcony, and ho! What a sight! Yes, green leaves, bright clear sky, wet roads, water logging! How much we missed all these! Of course, that was reason to get dressed in jeans and t-shirt even on a weekday! Anyway, it was a great morning, thanks to the weather! And, I will pardon myself for oversleeping today! After all, the rain gods have played a prank!

Ps: Re-reading it, it seems narcissitic! Anyway, please pardon me! I promise to be less narcissitic next time round!
at June 30, 2009 No comments:

Two Rapes and a Bandh

During the fag end of last week, one was assaulted with twin rape stories, a gang rape of a girl and a rape of a domestic help by the house owner. What’s interesting, or rather revolting, is the way people/media/the police interpret rape and these cases. In the first case, the police say that the victim was in a ‘compromising’ position with her boyfriend. For once, the state viewed this statement from the police through a feministic lens and promptly transferred him! Well, one mustn’t forget the fact that this incident happened in Gujarat (whoa! Only the name sends shivers down one’s spine), where 1000s of Muslim women were not only raped, but also had steel rods and wooden planks inserted into them during the Gujarat 2002 riots! Before looking at the communal edge this rape victim has over the several other women raped in her state, we must try to see how rape is used as a tool by the patriarchal society to: 1. Perpetuate violence on ‘the other’ community, class, and gender 2. Subjugate woman by making her think that honor is all that MUST matter to her. 3. Make the woman herself responsible for the violence as well.

Rape, as a lot of movies, media, and books would have us believe, is not about sex. It’s about power. Several studies have been done and books written to ascertain this fact. It about the ultimate subjugation of the prey by the predator, where the predator uses all available mechanisms to acquire the prey. In a way speaking, if rape can be considered murder (of course, it’s an extrapolation), it’s a premediated, cold-blooded act. Therefore, it is a well devised tool to cause damage to ‘the other’s’ sense of dignity and humanity. This takes us to the next point: honor. Here comes our understanding of the origin of private property, which led to the commodification and ownership of women. In this scenario, the woman and her body are owned in toto by the nearest patriarchal figure: father, brother, husband, or son. So, any ‘harm’ done to the woman’s body (she doesn’t have a mind, you see!) directly affects the owner. And hence, the man is supposed to protect his woman with his life (in reality, by erasing any semblance of her real self). No wonder, the society developed institutions such as the purdah, sati, dowry, sindoor, and many other practices, basically to make a commodity or an inanimate object of a woman. She’s the most guarded, especially her sexuality, which if left unbridled or unchecked can cause the biggest shame to the family, even worse than her death. This idea will help us understand the honor killings that happen in most parts of the country even today. This brings us to the third point where we look at the codes or rules of behavior (unwritten, at least, today) for a woman. She (if she comes from a lower class that depends on the upper class for its sustenance) cannot afford to be alone in the presence of a man from another community or class (as happened in the Ahuja case) or be in a ‘compromising’ position with her lover (in the Surat case). In both cases, the woman invited it upon herself! And, this is not pronounced by some uneducated, fundamentalist fools (who we can ignore), but the guardians of the constitution! If this is what the police will say, what is point of a State? Or a law and order department? If women must take care themselves, which is, basically, shut themselves up in their homes, not study, learn household chores, have arranged, caste-, class-based married and of course get raped again (marital rape, I believe is still not recognized as rape) and be safe! Women needn’t be equal partners in nation building, in bringing the revolution, in making new discoveries, or (damn it!) in anything! Should all the women just disappear into thin air?

Now, the communal angle! In just hours after the incident, one of the right-wing parties in Surat called for a bandh! I mean what kind of an opportunism is this? The same state where 1000s of women were inhumanly raped, killed, and burnt, is calling for a bandh for the rape of one girl? How is this girl different from all the other victims? Is it because she's among the beautiful people of the society? The bourgeoisie or the uppercastes? Whereas, all the women ambushed in the riots were from ‘the other’ community or from working class backgrounds? After all, who is the society for? Can’t we have sanity even in the way we deal with crimes? Can’t we divorce ourselves from our hangups about class, caste, and gender at least while dealing with crime?
at June 18, 2009 5 comments:

In the depth of my sleep, within my dark room
Within recesses of memory
A vision of uncertainty
Clouds my heart, awakening years
Of untold stories
Of wordless guilt
Of unconfessed pain
Of timeless, elusive search
at June 09, 2009 1 comment:

People talk of heaven as if it were some place far far away from this world. But, none of these people are in any hurry to leave the world, in any case!

I, for one, believe that the earth is a beautiful place to stay, and it has nuggets of heaven for everyone, but yes…some people tend to appropriate more..ok, ok, this no class-caste politics; it’s supposed to very light, happy reading.

So, here’s a list of nuggets of heaven I experience…

A dark, empty room with minimal streetlight streaming in; a cup of hot, herbal tea in hand, and a favorite tune playing. (at the end of the day)

The taste of little mulberry fruits straight from the tree, as you rush through the morning.

Fresh, dry, comfortable clothes after a bath in an open, dirty waterfall like Courtallam (a popular tourist spot in TN).

Watching hail, storm, and dust from a speeding bus.

Spotting fish in a clear river from a hill.

10 missed calls and 8 messages on your cell when you forgot to carry it.

More than 30 people at a protest to resist oppression.

Watching stars and the moon, lying flat on the earth.

Hugs and missed-yous when you return after a break.

To remember the words of an old song that brings alive old, romantic (;)) memories.

To lay your head on dad’s big, strong, and dark hand.

Have a heart-to-heart, bitching-cum-gossip session with girl friends.

Chatting with people, who are mirror images of course, with well, some kinks!

Listening to great minds that promise a revolution, fire your imagination, and make you dream.

Managing to hit your fund-raising targets for your collective.

Getting love bites from your cat and dog.

The smile on mom’s face as she smells the new, office-wear cotton sarees you got her.

Seeing new buds every day on your plant.

Hearing praises about your sibling.

Getting drenched in rain and falling horribly sick.

Walking along a sea shore, just with your thoughts in deep communication with the sea (ok, am not mad, neither am I on that road!).

Getting lost in the web of music.

Talking in local, colloquial, street Tamil after several months (which feels like centuries).

Making eye contact with the cook in a food van, and he heaping your plate a wee bit more!

When you spot guys like Shahrukh and Surya on rail crossings and traffic lights, respectively, and they spot you back! (Am not lying; it happened!)

Dying strains of sound buried in a mire of silence
Sounds of despair, of hope, of undead love
An unquestioned birth into mirth
Silent, muted voices of dissent
Consumed in consumerist rusting of soul
Rotting of mind,
Unshed tears of wordless, numbing pain

Retreating within a cocoon of notes, blinded by darkness
Borrowed lines of expression
Of intimate pain, of sorrow, of loneliness in a desert
Parched, dry wells of living water
Bounded in boundaries of love and lust
Putrefying of soul,
Unspoken words of violence, stinging consent

(Ps: Written while listening to Bheegi Bheegi from the Hindi film, Gangster)
at June 01, 2009 No comments: 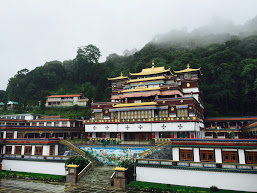